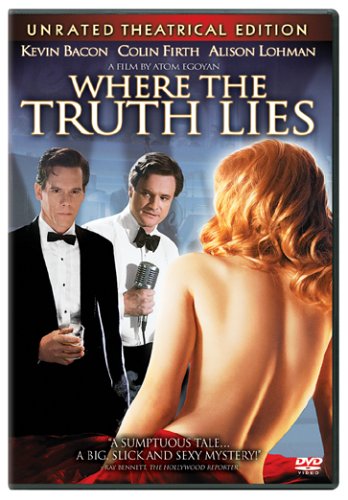 Brand : Sony
from USA
to Uruguay
in 5-8 days
At your doorstep by Aug 10  to Aug 13 with standard delivery

Director Atom Egoyan's 2005 film Where the Truth Lies is laden with nudity, sex, violence, lies, blackmail, betrayal… and really, what more could you want? Other than some genuine tension, a more compelling story, and better acting, that is. In adapting Rupert Holmes' novel, the Cairo-born Egoyan (Ararat, Exotica, The Sweet Hereafter) has taken on a murder mystery with film noir elements that will leave many viewers wondering exactly "whodunit" until the final few scenes; and while that's surely a good thing, the ride itself simply isn't all that scintillating. Kevin Bacon and Colin Firth star as a (Dean) Martin & (Jerry) Lewis-style team whose principal talents seem to consist mainly of pill-popping, soulless sex with a stream of nubile young women, and hosting an annual polio telethon. Fifteen years after their '50s heyday, journalist Karen O'Connor (Alison Lohman), who appeared on the telethon as a child, seeks out the pair to determine why they split up and, not coincidentally, what really happened to the dead girl with whom they had dallied the night before. Bacon is reasonably unctuous as the leering Lanny Morris; but Firth is uninspired as the more elusive Vince Collins, and although Lohman is game, she sometimes seems out of her depth in a role that calls for her to both seduce and be seduced, to manipulate and be manipulated. Egoyan, who also wrote the screenplay, has an eye for odd little details (much is made of Pan Am's first class dinner service, for instance) and an ear for great music (the soundtrack includes tunes by Charles Mingus, Louis Prima, the Mahavishnu Orchestra, and Funkadelic) and good dialogue ("Having to be a nice guy is the toughest job in the world when you're not"). But the film is curiously tepid; the sex is unconvincing, the mystery lacks a sense of danger, and the resolution is hardly shocking. One wishes that, having dipped into this genre, Egoyan had gone all out and made a film as delightfully sleazy as, say, Basic Instinct. --Sam Graham
Show More
Reviews

Disclaimer: The price shown above includes all applicable taxes and fees. The information provided above is for reference purposes only. Products may go out of stock and delivery estimates may change at any time. Desertcart does not validate any claims made in the product descriptions above. For additional information, please contact the manufacturer or desertcart customer service. While desertcart makes reasonable efforts to only show products available in your country, some items may be cancelled if they are prohibited for import in Uruguay. For more details, please visit our Support Page.