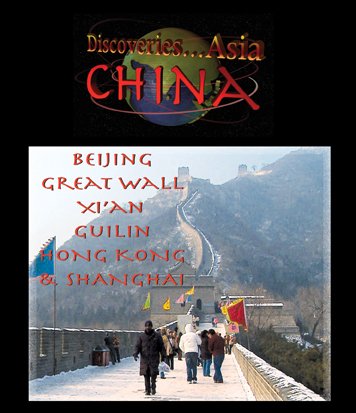 Brand : Discoveries Asia
from USA
to Uruguay
in 9-15 days
At your doorstep by Jan 27  to Feb 02 with standard delivery

Beijing has three of the city's most impressive historic attractions: Tiananmen Square, The Forbidden City and the Temple of Heaven. Early mornings many Chinese start their day with tai chi chuan at the Temple of Heaven. The Imperial Palace was off limits to the public for over 500 years and was hence known as the Forbidden City. Now a UNESCO World Heritage site, it is the Imperial Palace Museum. One of the main entrances is just off Tiananmen Square, the worlds largest public square. Nearby, hutongs (old neighborhoods) still exist surrounded by 20th century progress. The Summer Palace is the largest imperial garden in the world and is a great example of classical Chinese garden architecture. The Great Wall of China was first built in the 7th century as a defense against the Mongolians when China was still divided into many small states and today it still twists and winds along hill crests, gorges, and rivers for thousands of miles. In 1974, a group of peasants uncovered some pottery while digging for a well and accidentally uncovered the remains of one of the greatest archeological discoveries of the century, the Xi'an Terracotta Warriors. Life-size terracotta figures of warriors and horses arranged in battle formations are the star features. Guilin and the Li River with it's limestone towers and the view from a river cruise through it's crystal-clear water is outstanding. Nearby Yangshuo City Market is a site to behold. Hong Kong is a kaleidoscope of life, a blending of East and West, Symphony of Lights, The Star Ferry, world's longest open-air escalator, markets and fantastic historical photos taken from Victoria Peak all leave an indelible impression. Hangshou is considered one of the 10 most scenic cities in China and Shanghai, one of the largest urban areas in the world, is recognized as China's most important center of commerce. REVIEW: VIDEO LIBRARIAN - ...Shot during winter, this beautifully filmed travelogue is definitely recommended.
Show More
Reviews

Disclaimer: The price shown above includes all applicable taxes and fees. The information provided above is for reference purposes only. Products may go out of stock and delivery estimates may change at any time. Desertcart does not validate any claims made in the product descriptions above. For additional information, please contact the manufacturer or desertcart customer service. While desertcart makes reasonable efforts to only show products available in your country, some items may be cancelled if they are prohibited for import in Uruguay. For more details, please visit our Support Page.